Students had the opportunity to participate in workshops with former Ubisoft artist Johanna Cranston, who taught students how to create their own chibi-style characters and spoke about her experiences in the games industry. Art-loving attendees could also buy postcards and badges featuring Johanna’s imaginative designs, and many students seized the chance to have their purchases signed by the artist! 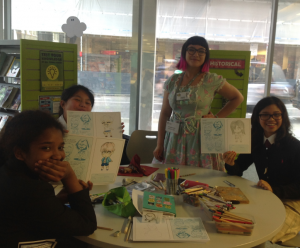 Cosplayers Teraana and Demorafairy, attired in full cosplay garb, added to the exciting line-up of guests. Students rushed into the theatre to attend an introductory talk and Q & A on cosplay, where they then had the chance to meet and take photographs with the speakers. Eleven lucky students also joined Teraana and Demorafairy’s Worbla workshop, where learners were taught how to use the thermoplastic to create costume armour. 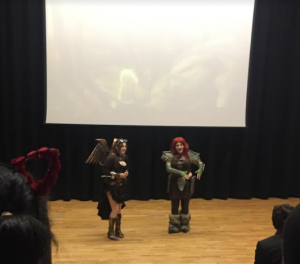 Junior Tomlin, a digital artist and colourist for Marvel, also brought along his fantastic portfolio for students to see! 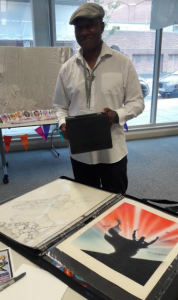 At the end of the evening, prizes were awarded for the best student cosplay in a tightly-fought cosplay competition. Thomas K. (Y7) was awarded an honourable mention for his hilarious Morty Smith impression, but ultimately Aidan P. (Y8) was awarded the prestigious first place prize. Hamda A. (Y9) also claimed a bag of goodies for demonstrating a spectacular knowledge of anime, manga, comics and KPop and triumphing in the Kahoot Comicon quiz.

A big thank you goes to all the staff and students who helped on the night and in the run up to the event. Comicon would not have been as much of a success without their help!