All of the students who got a bronze award or better in this year’s Physics Olympiad were invited to a lecture at the Royal Society entitled “Spacecraft I have known and loved” delivered by Professor John Zarnecki, the President of the Royal Astronomical Society. The Professor has worked on some of the most important scientific spacecraft of the past 50 years including the Faint Object Camera (the most sensitive camera ever built) for the Hubble telescope and the Cassini-Huygens probe which visited Jupiter. It was really eye opening to realise the the planning, deployment and running of these mission takes decades with scientists having to design and build instruments that will have to continue working for years without anyone being able to fix them if something breaks. 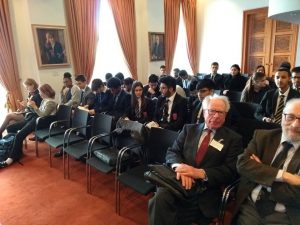